Sources History
As from earlier 1960s the Moshi urban population was getting water from Nsere and Shiri springs with the one trunk main and distribution lines inspite of increased population. Following the drawing up of the Moshi Master Plan for 1974 – 1994, preliminary designs were drawn to improve the provision of water supply services in Moshi. Among few important issues were to ensure the economic exploitation of existing water resources as well as solving the aggravating supply conditions due to excessive wastage of the available portable water by the majority of the consumers.

In 1986 through to 1992, a number of improvements were undertaken to increase the supply of water. These included capturing of the Njoro ya Dhobi spring, construction of a pumping station, and construction of a storage reservoir [Kiusa reservoir]. During 1988 to 1989 improvements included the drilling of two boreholes at Mawenzi and connecting this groundwater sources to the supply system in June 1995. These two outcomes, however could not suffice the needs of water supply for domestic, social and economic uses this important town.

Parallel to the aforementioned initiatives, the Government, with support of Donors decided to invest substantially in water sector in Moshi. Through the Moshi Water Supply Rehabilitation Project supported by the German Government, works were undertaken to improve water supply from the sources to the reserve tanks as well as the expansion of distribution lines. The works involved physical improvements of the water sources so that 328l/s in the average [equal to 28,321 m3/d] could be collected by the year 2008, conveyed by new trunk mains to the town of Moshi and distributed to satisfy a population of 194,790. This amount represents 85% of the demand for the envisaged water supply system of Moshi by the year 2008.

The Programme activities involved construction and rehabilitation of the following:

Currently MUWSA’s water services cover about 85 percent of this population, a jump from 60 percent in the 1980s. The average composition of this coverage [customers based] is 66 percent domestic, 17 percent institutional, 15 percent commercial, and 2 percent industrial markets. Water production stands at about 8.5 million cubic meters a year. About 87 percent of this water comes from the springs of Mount Kilimanjaro and flows by gravity. The remaining 13 percent is from the borehole.

Introduction:
Basically about 90% of coverage area is supplied by gravity system. The water is gravitated towards the supply area from two main spring sources namely Shiri and Nsere located about 7km North West of Moshi Municipal. The daily production of these two spring sources stand at the tune of 20,400 m3/day

The remained 10% of coverage area is saved by pumped system from two boreholes namely Mawenzi and KCMC. These two bore holes produce a yield of about 4,100 m3/day i.e. 3500 m3/day and 600 m3/day respectively.

The four sources mentioned above and another standby source namely Njoro ya Dhobi has a capacity of producing up to 28,933 m3/day. However the Authority is producing an average of 24,500m3/day which is a current estimated demand.

Water produced from these sources is supplied to customer’s points though a network of  264 km of diameter ranging from 1.5” to 20” and assorted type of materials i.e. cast iron, PVC, HDPE, galvanized pipes and DCI 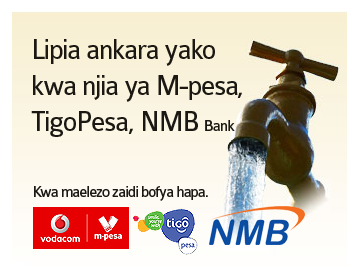